My favourite day was Thursday when we went to the “Gardaland” fun park. I really liked the roller coasters that were called “Mammut” and “Raptor”, but both water roller coasters were also great. (…) 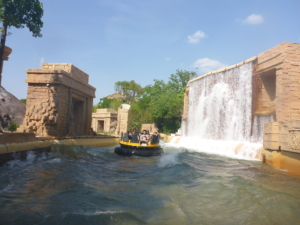 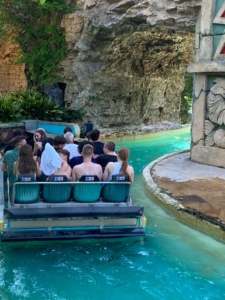 My favourite moment on the trip was when we played volleyball together. (…) We played till ten p.m. and it was a lot of fun.  The biggest team that we had was a group of six people. Generally, some people came during the game and played with us. The only disadvantage was that there were stones which hurt when you walked on them. 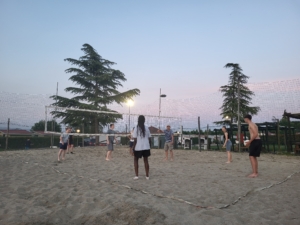 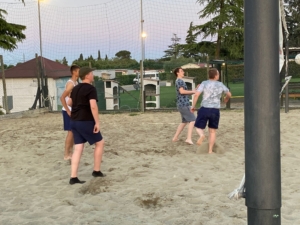 A few of my favourite moments were in Gardaland. In the beginning, we were a group of Steven, Lukas, Andy, Dennis and I but after that, a few more people joined us like Flavia, Raman, Roman and so on. One of my biggest fears is roller coasters, but I dared to ride a few of them. When I saw this huge white roller coaster, I cried because it made me panic. (…) Gardaland was great fun and exciting. 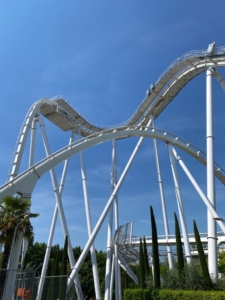 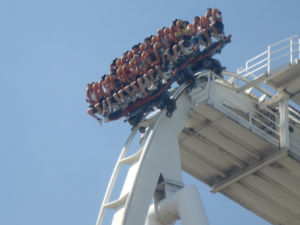 (…) At 4 p.m. we all met again at the exit and took the bus to our mobile homes. While we were there, we played a few games and went to the lake. Then we had dinner. After dinner we celebrated. We hadn’t been able to celebrate for the last 2 years and that’s what we noticed and that’s how we celebrated. In the end, I ate my Vec de Pressace  (Presssackweck) with Mr Barth like every evening. Then it got late and we were all exhausted and went to sleep. 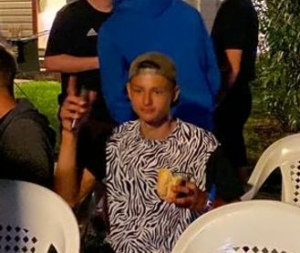 My favourite moment was on Tuesday night. We were all supposed to go to bed. After we had gone into our bungalows, we waited all till the teachers were gone.When the teachers were gone, Dominik and Jeremy came and we all went outside to chill. There we met Julia and Flavia, they came to us and I talked a lot with Julia, Flavia, Dominik, Jeremy and Sophia. Suddenly it was 7 a.m. and then everybody went to bed (…). At 8 o’clock we stood up and made us ready for the day.

My favourite day in Italy was definitely when we went on a canoe trip. My best friend and I went together in one boat. There was a big spider in our canoe, we both got so scared and a teacher had to put the spider away for us. We had to put our vests on for safety. Many people fell into the lake, but luckily, we did not. On the contrary, we were very much in sync and far away from the other people. It was exhausting, but we reached our goal quickly and were always good at it. (..) There was a beautiful view from our canoe. We had a lot of fun and it was a great experience. 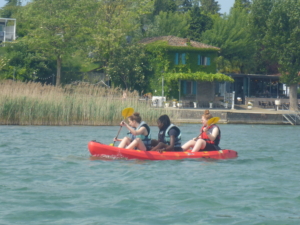 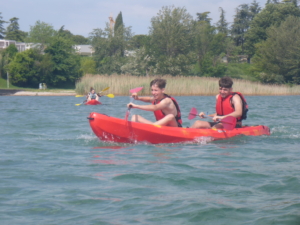 In the evening (…) Lora, Flavia and I wanted to stay a bit longer outside, so we decided to hide behind the bungalow and Flavia told me to go to check if there were any teachers walking around. So, I went to check and suddenly I saw someone coming and I started to run back behind the bungalow. And because it was already dark, I didn’t see anything. There was a massive sand pile on the side and so because it was dark and I didn’t see it, I stumbled on it and I fell on my back. But I was still in a hurry because someone was coming toward us, so I had to get up very quickly even though it hurt and hide otherwise the teachers would have seen us. The girls were laughing so hard that even I forgot the pain and started to laugh, too. But in the end, we managed not to get caught.

My favourite day during the class trip was (…) when we visited Sirmione. Everything about this town was amazing. Sirmione itself was beautiful from the inside to the outside. I loved the way everything was built there too, how the buildings and shops were etc. The views to the lake, the views to the other parts of Sirmione… the views, in general, were fantastic. (…) I bought some things there and I ended up really happy with what I bought. First, I went to a “Gelateria” an ice cream shop. The ice cream there was a bit more expensive than in Spain for example, but it was worth it because the ice cream was two times bigger there than in Spain. Second, I went to a souvenir shop. The things there were really cheap, but I only bought one thing, a fridge magnet. (…) 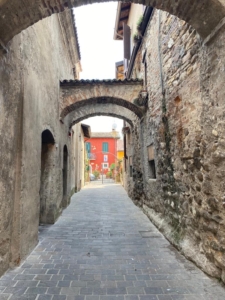 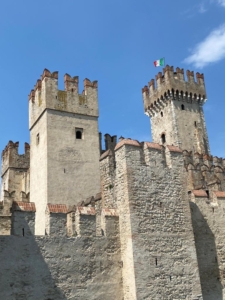